While updating your Self-Hosted version you have to follow two steps:

Preparing for the update

Choose the version for Self-Hosting

You can check the Updates page to see every version of Self-Hosted DronaHQ and its changelog. Peruse the changelogs between your ongoing version and the version you’re moving up to. Changelogs additionally contain directions for overseeing deprecated features.

Try to keep your self-hosted version updated to the latest version. Sometimes, in the event that a component is deprecated in the most up-to-date version, you should move up to the version just before the most recent so you can carve out an opportunity to relocate off the deprecated features prior to moving up to the freshest version.

First, you have to update the scripts, in case you haven’t done it, open up the terminal and go to the self-hosted directory.

Run the following command. This will update the scripts in your system of the self-hosted version which is currently present in your system.

Notify the users before the update

It is helpful for the users to get notified before any updates. Although updating the self-hosted version takes only ten to fifteen seconds, the system goes through a downtime, so to make sure that the users are not affected during that time, they should be notified prior to the update.

Before installing the updates, the best practice is to create a backup of all the Self-Hosted files incase if you need them for restoring. If you’re deployed on a cloud platform like AWS, the cloud provider might have a convenient way to back up all of the states of your running instances and apps.

Once your scripts are updated, you are ready to install a new version of self-hosted DronaHQ. Open the terminal and move to the self-hosted directory.

Then, run the following command. This will show a list of all available new versions of the Self-Hosted version of DronaHQ.

Enter the target version and hit enter. It will take a few seconds to download files and then extracting them using docker and after that your new version of self-hosted will be installed. 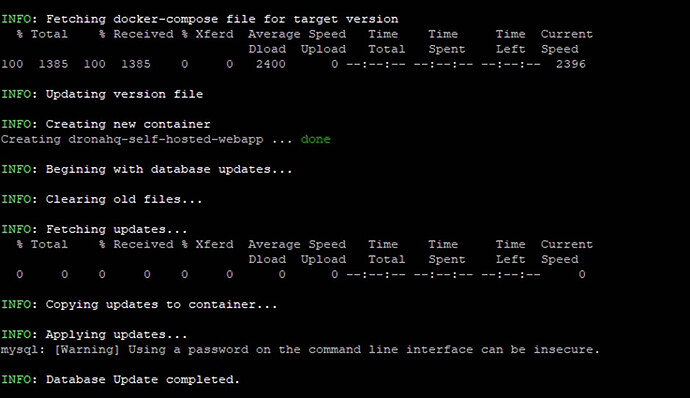 NOTE: You can only upgrade your system to a newer version of Self-Hosted but cannot downgrade to an older version.

Notify users after the update

It will be helpful for the users to be notified that the updating of the self-hosted version of DronaHQ is complete so that they can resume their work on their apps.