Launching the Designer for creating controls

Be in control of your Designs with the Designer

Why do you need a Designer?

Up until recently, a user could only do so much with an app like drag and drop controls, place them etc. This was perfect, why do you need to dive deeper. Well, why not?

What if the controls that you use for your app are also built by you according to your UI guidelines and choice? Suppose you had complete control over which part of the control performs which action and how. No matter how trivial these things sound, they are very important if one wants to really dive into “No code”.

We started with the thought that the user should have (almost) complete control over the UI of the control while we handle the data passing. Now we are here to say that you can do the above things too on Studio.

Though in its infancy, the Designer is a very powerful tool. It has proved itself multiple times in the development stage itself where people created Controls on the desired UI with ease. Something which is ready, something so easy ??

Where can you find the Designer?

You can start using Designer once you have logged onto Studio. 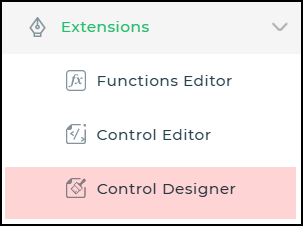 How do you use the Designer?

On the landing page, there will be an option to add the control. On adding the control, you’ll need to enter certain details like Control unique name( we recommend keeping it long and unique), Display name, group, and icon.

Once you’ve clicked on the “Add” button and added the control, you can start creating and editing your controls on the Designer. 15-20 minutes of playing around and you’ll be acquainted with the functionality. Then you can start using its features.

Creating a control like the one created above would be 10x simpler plus you’ll have the option to update the controls over the air.

You can change the look and feel of the control in between the app development without having to move the changes to each app. Suppose you have a control used in 2-3 apps and you want to update the control via Designer, we got you covered. Once you change the control and designer and publish the control, all the apps that are using that control will have the new UI. You only need to publish the apps to see the new control UI on the devices, a.k.a all in one place, which is No code development in its true sense.

States are pre-set UI that allows you to set the state of a card or control. For example, a card or control can have a green color if the user’s score is higher than 75 percent marks and red if it’s lower than 50 percent marks. Both the values and thresholds can come from sheets or can be hardcoded into the app. The user can set or remove the state from control using rules.

There is a separate video for understanding control states which you can view here.

We are sure Designer makes you feel in control of your designs and can easily create them to match your branding and on the go with ease that only no code offers. In case you have any thoughts, suggestions or feedback? We’d love to hear from you. Head to our forum to share in our Suggestions Section.