Git Sync allows you to version control your apps on DronaHQ Studio by connecting them with a Git hosting provider such as GitHub, GitLab, Bitbucket, and more, making it easier to track changes, make rollbacks or collaborate using git branches. Also, we can connect to any app in the same or other account enabling users to seamlessly move between different environments.
NOTE: For Git sync to work the user needs Git hosting service which supports SSH protocols and currently it is available on self-hosted and not available on the cloud.

To connect your apps on DronaHQ Studio with Git, you must have a GitHub account, or any other version control accounts such as GitLab, Bitbucket, etc., and must have basic knowledge of git operations.

The connection is successful and ready to use other features.

NOTE: The default branch for connection is Master for GitHub.

Push to the repository

In this window, users can make changes and commit to the branch of the repository. It will ask for the branch to which you want to commit along with a commit message.
Your app will be saved in the DHQ_Microapp.json file in your repository’s root directory, If the repository does not contain the following file, then it’ll be auto-created or overwritten on subsequent updates in the repository. Please do not make any changes to that file.

This is useful when you are developing your app further and want it to sync with the repository with which your app is linked.

Git Tag - Create a tag with the commit

Git Tagging is used to tag specific points in a repository’s history as being important. This acts as a specific snapshot for important commits. Typically, people use this functionality to mark release points (v1.0, v2.0 and so on).

You can provide a tag for your commit with some tag descriptions, which will be useful to refer to in later development.

After this hit Commit & Push. 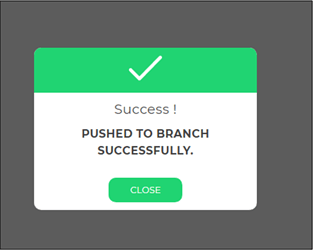 NOTE: Once you commit and push changes, the progressions are additionally distributed for the app viewers. Please note that the deployed version of one branch doesn’t influence the other. For instance, in the event that you are dealing with the main branch m1 and you deploy the changes from m1 branch, it will not affect the changes of the master branch

Pull from the repository

If your local branch is not in sync with the remote branch of the git repository, you pull the latest changes by clicking on the pull button at the bottom left corner.
Select the branch whose app changes you want to overwrite in your current app.

NOTE: Your current app changes, if not committed to git before this step gets lost. 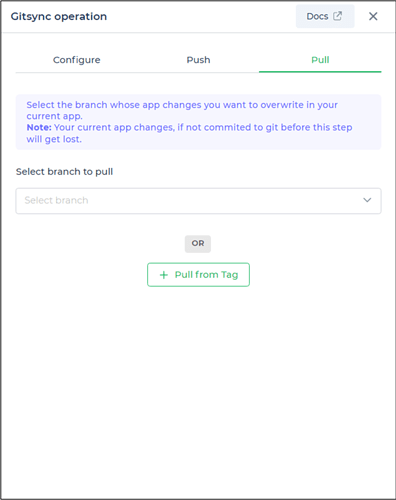 While pulling from a branch you can also select a specific git tag. This will help you to take upon your project from the commit of the tag itself without affecting your developement. Simple click on Pull from Tag, and click checkout respective to the git tag your want to continue with.

Important :
While we pull the files from the repository, we have to make sure that the same connectors and APIs with the same name are needed to be present in the account. It works the same as the functionality while importing files, you can refer here to know more.