This article is now deprecated. Refer to this article here for more information.

This article will guide you on an alternative way to create a screen using the Import from Existing Sheet feature.

In Studio you can create a screen in two ways - Create an Empty Screen and create a screen using the Import from Existing Sheet feature. In this article, we will see how to use this feature to build your screen. Very often, in the software development cycle, software architects will design the database before designing the UI. Then tweak the database and/or UI as per the requirements to produce a final system. Similarly, in Studio you can first design the Sheets (database) and create a UI based on the Sheets. This makes the UI development faster as compared to creating a screen from scratch. You can also use the same format (Sheets) and create as many apps you need. This minimizes the efforts in creating a new screen altogether if the structure is similar.

Let us see an example where we create an app called Leave Application using the Import from Existing Sheet option. 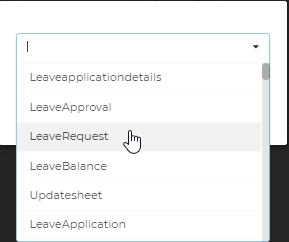 In this modal, you will see all the column names listed that are present in the sheet “LeaveRequest” along with a icon showing column type (these icons are same icon as of a control). Select the desired column to be imported (turn off the toggle button corresponding to the column if you do not want to import that column) and click on Generate Form button.

The controls that are created will have Label name auto populated based on the Sheet’s column name. As shown in the above image. This will create a screen with controls based on the column type of a sheet. You can modify the control’s name and properties as desired.